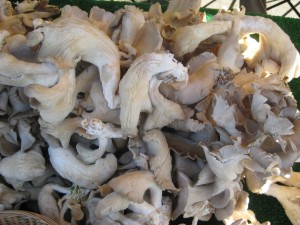 Smug Scout was tickled to go to the Mar Vista farmers’ market this morning and see that one of her favorite backyard farmers had a massive pile of oyster mushrooms. She bought one pound of them because she has made a miraculous discovery: when she marinates them in local organic olive oil and Santa Maria BBQ spices, then roasts them in the oven till they are dark, shrunken, and brittle, they taste very similar to bacon. This is important because Smug Scout does not eat pigs. She does not eat pigs because pigs are smarter than most American voters. She is sorry for pigs that their stomachs are so delicious. She is also sorry for pigs because a manic, insatiable bacon craze has struck Smug big city restaurants (not so much in L.A. due to the greater popularity of anorexia) and forced chefs to corrupt formerly meat-free dishes, such as salads, vegetable sides, and even desserts, with that one ingredient whose first name is spelled every single way except O-S-C-A-R.  Hipsters and gimmicky chefs do not say bacon; it is pork belly, smoked jowl, fatback,  pancetta, porcetta, prosciutto, guanciale, lardo, lardons, serrano, or Speck. Sometimes it is even pig’s tail, snout, trotter, or eyeball for a very special genus of hipsters, those unique Smug-epicenter-dwelling male specimens who suffer from what Dr. Smug Scout has diagnosed as “toothless machismo.” This condition leads them to believe they would go out and kill their own animals if only they were not pale, spineless, and glued to their MacBooks all day.

Frankly, Smug Scout wonders what could happen if this bacon-by-any-other-name furor continues to grow. She imagines the following nightmarish scenario at  a favorite Smug restaurant: 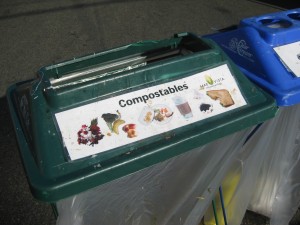 Today’s Smug farmers’ market find is this Compostables depository. Now technically Smug Scout has known about and used this Compostables depository for several years, so it may not be a new find, but it is still an important one to highlight, especially because Smug Scout was unusually grateful to have it there today. Part of being Smug is not putting food waste in the trash with the very, very few non-recyclable items you purchase. Smug Scout first saw compost many years ago in Germany, where it is called Biomüll (“biological” garbage) and has its own bins on the street to be picked up with trash and recyclables.  She always remembers how disgusting and rank those Biomüll bins were.

But now she is Smug and has her own problem with Biomüll.  It is still rank and disgusting, but now it is in her kitchen. She keeps a plastic bag under her sink, which she brings to the Mar Vista Farmers’ Market and empties every Sunday. That sounds easy and virtuous.

Too bad it is also rank and disgusting. This morning when Smug Scout reached under the sink to get the compost bag, she thought she smelled a rotting corpse. (She has actually never smelled a rotting corpse, but she now understands why people on TV throw up violently after exposure to one.) Then, to make matters more vile, she realized the bag, a bag she may have reused one time too many, had a leak, and a loathsome brown trail was crawling across her kitchen floor.  She shook her head in horror at the idea that her beautiful Gerbera daisies, Fuerte avocados, September Bright nectarines, and Lompoc asparagus could leave such unspeakable remains, that all those inedible stems and pits could metamorphose into such a stinking, seething mass.

The next problem is the disposal of this putrid bag of death. While Smug Scout does not shy away from performing Smug acts in public, the exception is when she is dealing with this gruesome, if ecologically high-minded, business. Now Smug Scout always arrives at the FM shortly before it opens at 9am, and while her main reasons are to get the prime produce and to avoid the murderous parking lot gridlock, her previously unacknowledged reason is to dump her compost without anyone nearby wondering if she is unloading half-decomposed body parts. When she emptied her repugnant load of organic sludge this morning, she also put the leaky plastic bag in the neighboring bin, the one for all other recyclables (yes, including plastic bags, you Smug San Franciscans!). That bag just had its final reuse.

Now you must all wish your farmers’ market had a Compostables depository! Smug Scout is sorry for you if you do not have such an opportunity to compost. 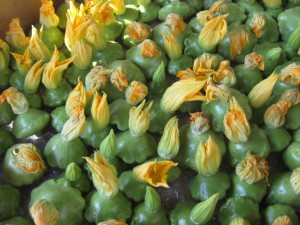 As her name dictates, Smug Scout loves to spend her time on the lookout for new Smug treasures at farmers’ markets.  Her local Sunday market in Mar Vista, which began as a small, not very Smug market, has grown into a Smug monster with a ferocious parking scene. Although it is not as Smug as the Portsmouth, New Hampshire market–no others are–Smug Scout was delighted to find a stand that brought her straight back to Portsmouth.  What could have possibly reminded her of Portsmouth?

So imagine Smug Scout’s delight when she was about to pay for her dirty and deformed organic heirloom tomatoes and happened to spot baby patty pan squash with the blossoms still attached!  And she loved the careful recycled cardboard box display: single layer with blooms sticking up like cockscombs!

Then, as Smug Scout was carefully placing these gems in the reusable bag she brought, some weather-beaten rube approached her to ask a question:

Alas, not everyone values or even pretends to tolerate Smug Scout’s expertise. At least she got a toothy smile from the young dreadlocked farmer.