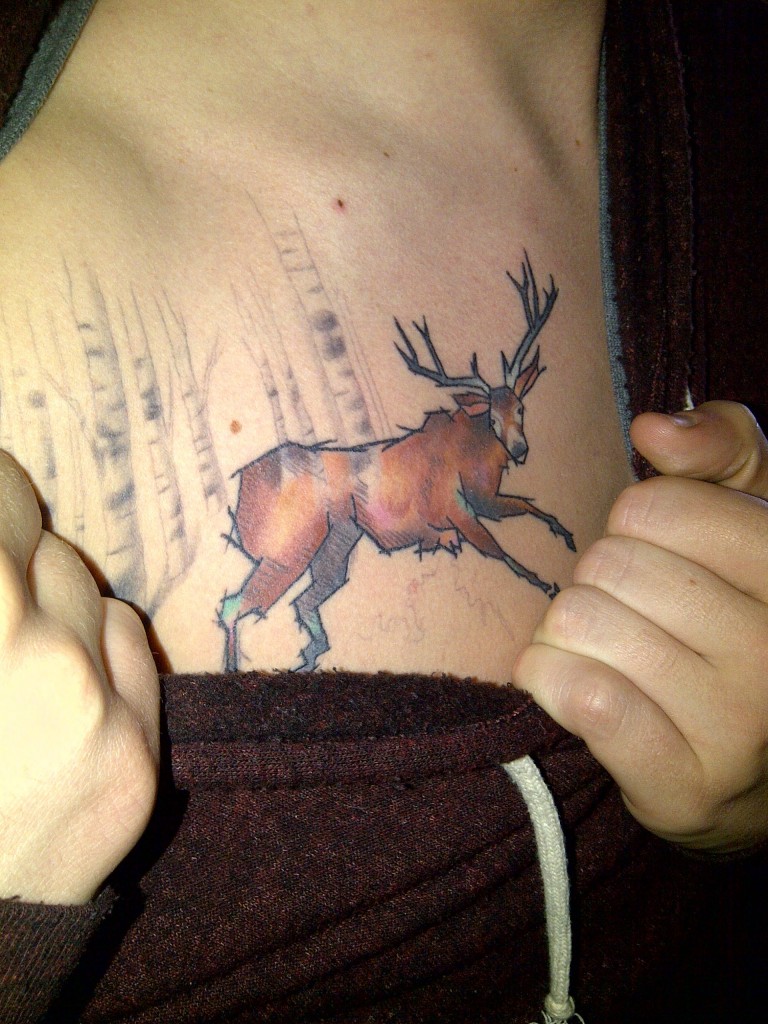 Smug Scout does not like tattoos. Not one bit. She knows this is not a popular position, but she stands by her unpopular positions because she knows that ultimately they are inconsequential anyway. She believes tattoos usually fall into three broad categories:

So except for the handcrafted prisoner tattoos, Smug Scout did not see much Smugness in tattoos. She did not see it until her recent visit to her favorite Smug epicenter, Portsmouth NH. A Smug friend of hers introduced her to its owner (also the artist) at a Smug local bar where she was lucky enough to photograph it (and, yes, this is typical of Smug Scout’s silly drinking shenanigans). It is the most Smug tattoo she could have ever imagined: a hand etched looking deer with powerful antlers leaping through a forest of birch trees. Antlers are Smug because in their dead form Smug people–who would never dream of anything as barbaric as actually hunting the deer–feel they match reclaimed wood furniture and frivolous local handcrafted household accessories. Birch trees are Smug because they are pale, thin, uniquely colored, grow wild in New Hampshire, and, most importantly, look beautiful even when other trees are bare and the landscape displays a deathly bleakness. This tattoo conveys a fascinating phenomenon to Smug Scout: a local, seasonal, artisanal person, in essence a Smug product in human form. Smug Scout would probably never get a tattoo herself, but she does wonder what tattoo would suit her. She feels certain it would involve black kale.

One thought on “Smug Tattoo”