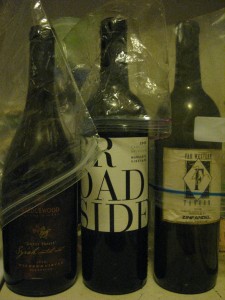 Smug Scout is not a natural housekeeper and has virtually nothing to share on Smug topics like green cleaning or time and space wasting European kitchen gadgetry. She will not apologize for any of that. She is not a Smug jack of all trades. However, because she has a small kitchen with what she is sure is an illegally small amount of counter space, she has been forced to improvise to meet certain needs. One of her most Smug needs is reusing Ziploc bags until the plastic becomes cloudy and wrinkled, perhaps toxic. Since she brings her lunch to work every day, and her lunch often features local organic heirloom cherry tomatoes, she must wash at least one Ziploc bag per day. But a dilemma presented itself: how could she dry them to prevent mold from befouling the interior? The solution arrived in the form of wine bottles she lazily left on the counter and did not immediately recycle. Smug Scout ingeniously turned the bags upside down and put them on top of the wine bottles; they dried in record time. Here are the Smug benefits:

Tip: do not let any flagrant wastrels make fun of your antique Ziploc collection. If that happens, use the diversionary tactic in this sample dialogue to develop a response:

Just ask Smug Scout if you need a bottle or two for your Smug wine bottle Ziploc drying poles. She will not share her Ziplocs, however. You will have to age those on your own.

Final warning: be proud of your Smug wine bottle Ziploc drying pole. Try not to let Smug friends bamboozle you into squandering $20 on a reclaimed wood plastic bag dryer from Vermont, even though this is clearly a very Smug object. Smug Scout in fact just found herself out-Smugged by a very Smug friend in Portsmouth who first took pictures of her reclaimed wood plastic bag dryer, pictures that featured Smug iconography such as MacBooks, hand varnished reclaimed wood tables, and an “earth-sensitive” pinot noir (a bottle that still had wine in it, pointedly not to be used as a wine bottle Ziploc drying pole), only to brag that she could not take a picture of this contraption “in use” because she simply “doesn’t use much plastic.” Wow! Out-Smugged on two counts! Now Smug Scout knows when she is down for the count, but she would like to point out that it is much more sensible to spend that $20 on a bottle of wine than an object you then become too Smug to use.