Q: Is it Smug to live in a reclaimed house?

A: Do you mean a foreclosed and condemned hovel in South Central?  That is not Smug, that is crazy.  Even after you have cleared out the squatters and fumigated the place with just the sort of chemicals you voted against the legal use of, you are still going to be stuck with shell casings and Flamin’ Hot Cheetos bags in your organic vegetable garden.  Furthermore, there will be not one single local store where you could bear to spend your money.

Q: I don’t live in a Smug Epicenter; can I still be Smug?

A: Yes, but you will have to work harder/travel farther to prove yourself.  For example, your Smug Scout lives in Marina del Rey, which is neither Smug (too many high-rise condos with views, too many sailboats, too many rich assholes) nor in a Smug City (L.A. is too glitzy and filthy to be Smug) but is near Smug Epicenters (Santa Monica, Silver Lake) and has numerous Smug services nearby (five FMs within a ten minute drive, one Whole Foods, two outlets of a Smug Austrian bakery, and zero conventional dry cleaners).

Q: I asked you a question!

A: If you are willing to flush money down the drain by spending money on coffee that is not local, seasonal, organic, artisanal, sustainable, single-source, or market driven, you certainly can afford to buy kale that has dirt clumps coming off it and eggs from a chicken who lives in more space than you do. 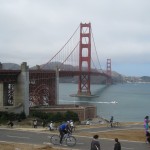 Q: Why is San Francisco the Smug Epicenter of the U.S.? I mean, I’m from Portsmouth, New Hampshire, and you know how Smug that is.

A: Look, Smug Portsmouth resident, you are just not at that level. Everyone who lives in San Francisco believes it is the one truly livable city in the world and only proles, hayseeds, and other Wal-Mart shoppers would want to live anywhere else.  They may be right!  And that is why Smug Scout loves those pompous San Franciscans, even though they despise L.A. and do not let ANY social graces get in the way of expressing that.  Smug Portsmouth residents do not assert their superiority so aggressively, perhaps because you people want to keep unsavory riffraff, in particular the dregs from Massachusetts, out of your utopic little city.  Smug Scout completely approves of that shuddering distaste for riffraff, which is also shared by San Franciscans, who of course rely on extortionate real estate and restaurant prices to keep the hoi polloi at commuting distance.  In short, where Portsmouth is a private club, San Francisco is an arrogant commune.  But of course part of being a Smug Portsmouth resident is believing that you do live in the Smug Epicenter of the U.S., and Smug Scout respects that view.