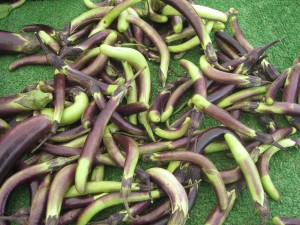 This week’s Smug Farmers’ Market find, Hawaiian eggplant, comes not from the usual Sunday Mar Vista market but rather the Saturday Silver Lake market. Smug Scout was excited to visit a market in L.A.’s Smug epicenter but then was a bit dismayed to find that it was not all that Smug and has no chance of knocking the Portsmouth FM from its throne.  Smug Scout is sure that Smug Portsmouth residents will feel righteous pleasure at the thought that the state of New Hampshire, despite its short fertile season (July), hardscrabble land (thin and rocky soil, scoured by glaciers), limited produce options (mostly flowers and greens), and homogenous farmers (a diverse mix of tenth generation Northern Europeans), offers a market much more Smug than anything in California, the country’s agricultural center and home to more FMs than anywhere in the world. You lose, Cali! 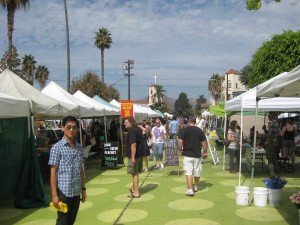 So how exactly did this Silver Lake market lose? Well, aside from Smug Scout’s Smug Eastside friend (pictured), many of the other shoppers did not look either affluent or its local variant, affluent in poor backwoods communist clothing. In fact, if Smug Scout were asked to free-associate, she would use words such as “slovenly,” “cretinous,” and “ghoulish” to describe many of the characters she observed. Seeing them walking on pavement painted like an all green Twister board did not help.

Furthermore, unlike in Portsmouth, this market really is just a place to buy produce, not one to “see and be seen” (at least Smug Scout fervently hopes that is the case). There was no entertainment for the Smug under five set unless you count a JonBenét Ramsey wanna-be (probably aside from the getting murdered part) who was singing and dancing in a way most of us would call obscenely mature. Her only audience was her agent (who may have also been her mother), an oily photographer (who did not appear to work for any legal publication), and a dog (who according to market rules should not have been there in the first place). Smug Scout does not believe this “entertainment” would be wholesome enough, let alone sufficiently law-abiding, to take place in Portsmouth. 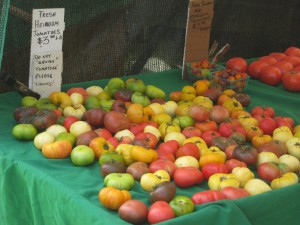 But finally one of the crucial reasons this market is not that Smug is its prices. They are simply too low. The produce quality and variety would qualify for Smug status everywhere else in the world, but here the gorgeous vegetables and fruit are tastelessly displayed on synthetic golf putting mats. The prices match these cheap and unsightly tableaux. And this brings Smug Scout back to the beginning, back to the Hawaiian eggplant. She got a gigantic bag of those sexy bi-color phallic nightshades for one dollar. 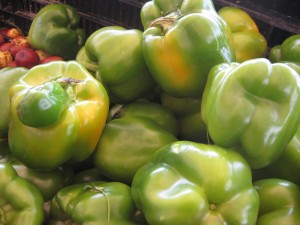 Ultimately Smug Scout is sold on the Silver Lake FM and her delightful Hawaiian eggplant. She got that eggplant, multicultural organic heirloom tomatoes, puffy sugar snap peas, and beautifully deformed bell peppers with parasitic attachments–all for the price of one shrunken head of conventionally grown lettuce in Portsmouth.

Still, whatever money Smug Scout may have saved on vegetables she then immediately spent in triplicate at an outrageously Smug lunch spot called Forage. “Forage” is about as Smug a restaurant name as anyone could craft. Can you beat that, Portsmouth?