Smug Scout is not a big fan of major holidays except insofar as they free her from work, which, grimly enough, is almost always at the same time as large numbers of riffraff and ruffians who moronically clog stores and roadways. She has a particularly strong distaste for what these same riffraff and ruffians treat as “drinking holidays,” mainly New Year’s Eve, St. Patrick’s Day, and July 4th. Smug Scout does not need an officially sanctioned holiday to drink more than joyless Puritans believe she should.  Miraculously, perhaps, she manages to create special occasions for drinking that do not require fireworks, dwarfs in green, or throngs of obscenely stupid revelers. She designates these (actually quite frequent) special occasions “going out to dinner.”

Unlike trumped up American booze holidays, Christmas does not inspire quite as much hostility, though she also does not especially like it. Drippy and overplayed Christmas songs make her scowl, excessive cheap and flashy decorations make her shudder, and grinning imbeciles in Santa caps and reindeer antlers make her want to throw up. She is somewhat amused watching television footage of brutal stampedes at low class chain stores. And although she generally insists on doing all of her shopping at FMs and local independent stores, she will admit she took advantage of Neiman Marcus’s free seasonal rush shipping to reward herself with a pair of handmade Pedro Garcia shoes that she will not be able to wear until she is in L.A. again in two weeks anyway.

Yes, Smug Scout is celebrating Christmas on the East Coast, where the air is cold and living trees outside match the decorated corpses inside. She does not feel any Christmas atmosphere in L.A., though the city’s flagrant phoniness seems well suited to that of the holiday. On the plus side, what L.A. may be lacking in old fashioned or noncommercial authenticity, it scores generously in Smugness, especially Smug Christmas trees. Smug Scout will present to you now three Smug Christmas trees, one from Hollywood and two from Silver Lake, and would like to see if you can determine the winner of the Smug Christmas Tree SmackDown. 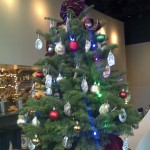 #1: This Smug Christmas tree is from the Hungry Cat, a restaurant in Hollywood that specializes in seafood and seasonal cocktails. The tree is green. Many of the ornaments are made from repurposed oyster and clam shells with cheery handwritten seasonal messages inside them. There are no gifts, only gift ideas under this tree: Hungry Cat spices and gift certificates. A cute pumpkin sits next to those.

#2: This Smug Christmas tree is from Bar Keeper, a store in Silver Lake that sells retro barware and glassware, exorbitantly expensive artisanal small batch spirits, and local drinking related crafts, such as handmade coasters. The tree is silver. The ornaments are their own coasters, ribbons, and beads. The gifts under the tree are actual full bottles of champagne. These are great gifts, Smug Scout hints to her readers. 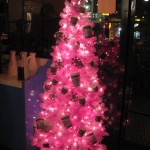 #3: This Smug Christmas tree is from Intelligentsia, the breathtakingly Smug “coffeebar” in Silver Lake that sells single source direct trade coffee at the highest price and for the longest wait you could find anywhere. The tree is flaming hot pink. The ornaments are glittery snowflakes and the company’s own branded cups. There is not a single gift to be seen anywhere near this tree, though if you want to give your Smug loved ones 3/4 pound bags of whole coffee beans for up to the not quite bargain price of $80, you will find a large array on the shelves to the right.

Winner: #3. Come now, any competition that involves Intelligentsia is practically over before it starts. But for the record Smug Scout would like to announce that she would not want anyone to spend $80 on a 3/4 pound bag of coffee for her, no matter what kind of fucking Columbian geisha santuario it comes from. Merry Smug Christmas! Or Merry Smug Xmas for you pagans out there.