Smug Scout knows she has been very remiss in her writing duties, if not her actual Smug scouting duties. She has been as busy with the latter as ever, especially during her summer vacation. Now that she is in Portsmouth, she feels very inspired again, most likely due to its uniquely jaw dropping level of Smugness. She has already spent two Saturdays at her favorite Smug epicenter, the Portsmouth Farmers’ Market. She is happy to report that virtually nothing has changed since last summer, but in the almost nine hours of amazed and amused viewing, often sneakily from the periphery, she captured some iconic images that she would like to share with her readers. You may be tempted to critique Smug Scout for photos of middling quality, but keep in mind that she was using her zoom lens to avoid unpleasant confrontation with her unwitting subjects. She is still not sure how she would have explained to some of these locals why she was taking their pictures, but she knows any attempt would have gone poorly or even worse. 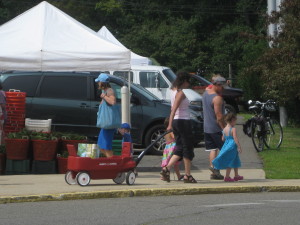 Smug Family: Smug Scout loves watching Smug local families arrive and depart, ideally without screeching sound effects. Though this picture does not show the wealth of detail she wishes it did, you will still notice some classic Portsmouth FM hallmarks: 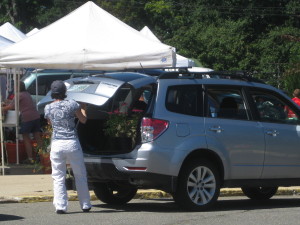 Loading a Subaru: Smug Scout does not plan to move to Portsmouth, though she dreams of it often. However, if she were to move here, one of the first things she would do is buy a Subaru Outback or Forrester. Then she would go to the Portsmouth FM and take part in a ritual that occurs with astonishing regularity:

Smug Scout realizes this activity may sound terribly banal, but she simply cannot believe how many owners of Outbacks and Forresters engage in this ritualistic activity every single week. She wonders if the Subaru owners manual instructs its drivers to have gardens established through these exact means. (“You may NOT buy plants or flowers at Lowe’s. You MUST seek out a local market. You may NOT load them carelessly or quickly. You MUST display them tastefully in the trunk.”) So fascinating, these Smug New Hampshire natives with their Subarus.

Hairy and Tattooed Shoppers: You simply cannot spend five hours at the Portsmouth FM without seeing all manner of excess hair and tattoos. Smug Scout grabbed her camera when she saw this archetypal couple (left). Note intentionally wild and style-free hair, colorless outfits, and ghoulishly pale limbs with indecipherable images tattooed all over. Smug Scout is not, however, impressed that these otherwise Smug locals did not bring reusable bags or third world woven baskets with them. Even if they forgot their bags/baskets, they could have bought new reusable totes from Black Kettle Farm or the Seacoast Local organization (motto: “You are where you eat”). This next one (right) did better in the 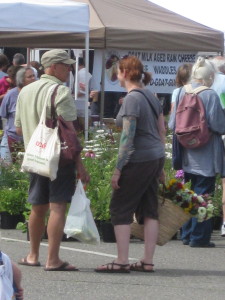 ecological department. Though her hair “style” is equally slapdash, her outfit equally dingy and drab, her skin equally ghostly, and her tattoos equally garish and impossible to interpret from the safe distance Smug Scout was forced to keep, this hairy and tattooed shopper at least had the good sense to bring a large third world woven basket and fill it with flowers, herbs, and greens that she, in classic Portsmouth fashion, arranges for display more than protection. Some of those flowers may be beheaded if someone–for example, a terrifying looking uncouth visitor from the backwoods interior of the state–bumps into her roughly, but she will probably make sure to be nowhere near such yokels.

Stay tuned for the second part of the Smug scenes from the Portsmouth FM series. The next one features a new age farm, a precious local band, and kale. Start brewing your Smug White Heron tea. Smug Scout will have the post for you very soon.