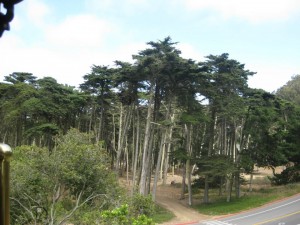 The Smug Scout has been spending a lot of time thinking about reclaimed wood of late.  Please do not offend her by deeming this occupation preposterous. What should she think about? World misogyny? Global climate change? The possibility that a large buck could impale Paul Ryan with live, rather than decorative, antlers? No, no. While she would love to picture Ryan bleeding to death from an antler hole while a deer family contemplates a rare non-vegetarian dinner, instead she is having apolocalyptic visions about the future of reclaimed wood.  With all of the buildings, furniture, household objects, and useless, expensive, unidentifiable knickknacks made from reclaimed wood, she wonders how soon there will be a shortage of unclaimed wood to reclaim.  She believes that Smug fans of reclaimed wood have a fantastical vision of the reclaiming process.  It involves a logger dressed up in a Brooklyn hipster costume, which itself was drawn from actual blue-collar loggers but now incorporates fair-trade flannel and “water-less” jeans, roaming forests in the Pacific Northwest.  It involves this sustainably dressed logger carrying an antique buzzsaw (please do not expect the Smug Scout to be technically accurate about tools) and occasionally stopping to forage some wild chanterelles.  It involves this hip and happy logger smiling as he carefully rescues dead trees from their sad fate of rotting and regenerating in the forest and places them in his hybrid logging truck.  It finally involves this Smug logger driving, of course a short distance, to a wide variety of artists and artisans, who will chop and slice the logs in an artistic and artisanal, if also absurdly profitable, way for sale to the country’s Smug suckers.  This is indeed a vision of tender and moving beauty.  The Smug Scout, however, sees it differently. She imagines that the future of reclaimed wood is in forests “reclaimed” from the pulp and paper industry as that industry realizes there’s more money in “reclaimed” wood than in institutional toilet paper, cereal boxes, and particle board.  Maybe Smug Scout is just too cynical.  Maybe Smug Scout needs to calm down.  Okay.  Just put a reclaimed wood cutting board with some foraged chanterelles in front of her, and she will stop.