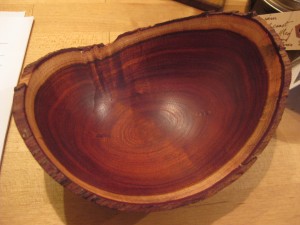 Big city Smug people, unlike their woodsy New England and Pacific Northwest counterparts, have an ambivalent relationship with nature. On the one hand, they love its dramatic beauty and lovely pre-reclaimed raw materials. On the other hand, it can be messy and disgusting, even dangerous. This is why big city Smug people, for example, tend not to like sleeping in a nylon bag on top of insect-infested dirt or grass, an unsavory activity also known as “camping.” Smug Scout recently read in a Smug West Coast magazine called “Sunset” about a popular new Smug activity known as “glamping.” She has a strong distaste for such inane neologisms, but now she understands what this one means: large tents with reclaimed pine plank floors, king size feather beds (naturally including turndown service), elk-antler bedside lamps, and private bathrooms with heated slate floors. It means local seasonal organic cuisine, often featuring local seasonal organic wild animals, served in a rustic lodge dining room or by some bearded laconic peon directly to the tent. It means outdoor activities that require North Face or Patagonia faux roughing-it costumes and, for legal reasons, an extremely experienced team of local guides. Smug Scout believes that this pale, defanged adventure can cost about $500 a night.

Smug Scout will be blunt: she is no more interested in glamping than she is in camping. She does not want to sleep in some foppish tent. She does not want to eat local seasonal organic wild animals. In fact, she hopes their living relatives will pillage those overwrought “tents” while the phony campers are away on some trumped-up “wilderness experience.” She certainly does not go “rafting” or “fly-fishing.” Her desire for all things rustic seems to have one massive limitation: she does not like to visit the scene of the rusticity; she really only wants a precious souvenir from it. For this precise and utterly cockeyed reason, she recently fell in love with the reclaimed wood bowl you may have already spotted in the above photo of a reclaimed wood bowl. This reclaimed wood bowl is a Smug masterpiece because it has the rare distinction of simultaneously embodying both the stunning beauty and unpredictable ferocity of nature. You can see the lovely rings and the handcrafted looking shape. You can guess that it was as expensive as handcrafted objects with zero practical utility usually are ($80) and purchased at a Smug venue (the artisanal Piedrasassi wine tasting room in Lompoc, California). What you may not see, what you must feel, is that it has extremely sharp, rough edges. You could get a splinter. You could cut yourself. You could catch your hand-knit fair trade humane non-mulesed-wool sweater on its feral points.

So we are left with the following paradox: Smug people would rather bring nature indoors than bring themselves outdoors. So be it. This pretentious tomfoolery is much better for the local economy than a bunch of primitives in sleeping bags who use trees for toilets.