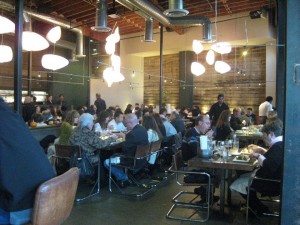 By now you probably know that Smug Scout spends a lot of her time (and probably half of her salary) in Smug restaurants, which are flourishing these days as more and more customers have Smug demands when they go out to eat. Let us discuss the most obvious indicators of a Smug restaurant:

However, one indicator that may be less obvious is the frequency with which kale appears on the menu. A truly Smug restaurant will heavily feature kale, at least two or three types, generally curly (i.e. Scottish) and black (i.e. cavolo nero) in at least five dishes on the menu. What is it 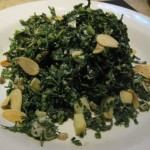 about kale? Smug Scout does not really know. Smug Scout thinks rainbow chard is prettier and Bloomsdale heirloom spinach tastes better. Perhaps kale is Smug because the foodie cognoscenti had to rescue it from its previously obscure, unpopular status, just like an extremely ostracized acne-bespeckled nerd with braces and head gear who grows up, becomes buff, stars in SNL, and is suddenly hot.

But of course Smug Scout loves kale, and she loves a Smug restaurant in Culver City called Akasha that stars kale in many menu items. In fact, it is her favorite

restaurant in Los Angeles, perhaps the entire West Coast (and is even a formidable opponent for Smug Scout’s favorite East Coast restaurant, Fore Street in Portland, Maine). Because of her frequent and enthusiastic visits, she knows the owner, the chef, several of the servers, and of course all of the bartenders. The bar manager/ sommelier/mixologist, Lisa, has even become a wine tasting friend. Smug Scout believes it is rare for someone to be so equally skilled as a sommelier and mixologist. Lisa is also proud to offer cocktails that are free of bacon (such as the persimmon/pomegranate punch and citrus jalapeño margarita in the above photo) though she has not yet made one with kale (please, Lisa?). You can surely understand why Smug Scout fantasizes about living above the restaurant and going there every day.

However, she does not fantasize about working there, because, as at any Smug restaurant, there are some vile and repellent customers. During a recent visit, Smug Scout saw some people in this category. She was sitting at the bar, as she prefers, when a group of four people arrived. She would describe these people as members of the aged arrogant moneyed lower classes, she thought perhaps “industry,” as they say in L.A. First, they imperiously displaced everyone near them in order to commandeer corner seats at the bar. Smug Scout scowled at this sense of entitlement. But the real irritant with such people is when they order food, because aged arrogant moneyed lower class people have a lot of special requests, none of them Smug. Smug Scout overheard a highly annoying conversation between a bartender and a grizzled large-nosed leathery female, whose primary goal in life, from what Smug Scout could tell, is being the unsightly spoiled wife of one of the short squat balding wealthy men. Smug Scout is not impressed by this level of ambition. Smug Scout will not replicate the exact conversation because the bartender’s answers were far more polite than the unsightly spoiled wife deserved. Thus, the below conversation is how Smug Scout would have handled it (and proof that she is highly ill-suited to work as a bartender in Akasha or any Smug establishment):

You can certainly see why Smug Scout is not cut out for such work. She has no tolerance of those who choose chicken wings over kale. She wishes Akasha would remove that dish from the menu, just as she wishes to see kale in the cocktails, but she still loves Akasha more than any other restaurant.