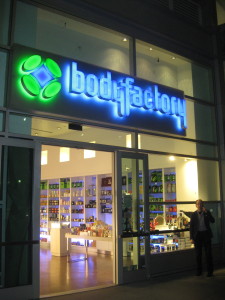 Smug Scout recently had the most disgusting smoothie of her life. She recognizes that “disgusting” and “smoothie” do not usually appear in the same sentence. People usually associate other words with smoothies, such as “delicious,” “refreshing,” “absurdly caloric,” and even “ridiculously overpriced.” Honestly, Smug Scout does not usually fritter her money away on such trifles, especially since she could have one minuscule artisanal cocktail for the price of three massive smoothies, and she is well known for her thrift. She can make her own smoothies by repurposing fruit that she may have neglected to eat in its prime whole form and mixing it with anti-Smug “L.A. County” milk she rescues from her workplace, thus sparing it a grim one-way trip to the landfill. 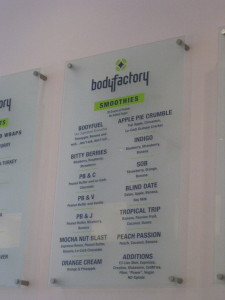 However, on the occasion under review, she and Smug Eastside Actor were in Hollywood (which Smug Scout has renamed Ghoulywood to highlight its overpopulation of grotesque, cretinous, daylight-averse residents) to attend a screening (because actors never just “see a movie,” too plebeian). They would not be able to have dinner until about 10 pm, so they decided to participate in a popular L.A. ritual: drinking coffee to delay starvation. Smug Eastside Actor suggested they go to a place called the Body Factory to get coffee, and though Smug Scout had no notion that a business by that vulgar name would have anything to offer her, she changed her mind when she saw the smoothie menu, essentially because of both what that menu boasted and what that menu left out. It boasted that each smoothie has 35 grams of protein and no added sugar. It left out all prices. This report will focus on those two elements.

35 grams of protein/no added sugar. What does it mean to have all that protein? Smug Scout thought it meant the smoothie would dull her hunger for four hours. What does it mean to have no added sugar? Smug Scout thought it meant the smoothie would taste like fresh local fruit. She was correct about the former and dead wrong about the latter. Smug Scout is sure her hunger was dulled because that smoothie tasted so awful it befouled the very idea of eating. It had the consistency of clay and looked like wet sand, like a beautiful beach poisoned by toxic algae, some sickly pale green kind. She almost needed a boba straw, if not a scoop, to get that sludge from the cup into her mouth. You may notice Smug Scout has not told you what flavor she ordered. That is Smug Eastside Actor’s fault. He recommended one called “Body Fuel,” which promised the following ingredients: “Pineapple, Banana and well…don’t ask, don’t tell…” Does that mean the smoothie contains pineapple, banana, and a gay member of the US military? Despite Smug Scout’s distaste for the military, she thinks even that would have tasted better than the chalky, gritty slop that fueled little more than an unpleasant exchange between Smug Scout and Smug Eastside Actor, whose punishment for this failed recommendation was being forced to help her consume it. He claimed he got a chunk of something (maybe pineapple? mud?) in one sip, but Smug Scout did not taste anything resembling fruit: fresh, local, petrified, or otherwise. Sugar added, subtracted, multiplied, divided, or given a calculus test would not have helped.

No prices. What is this charade? Is it like in that Sheila E. song “The Glamorous Life” when she sings about “if you have to ask you can’t afford it lingerie”? (Smug Scout would have punctuated that differently, but she does not believe Sheila E. cared about precise, or even any, dash use.) Well, Smug Scout decided to ask. Here is a slightly embellished version of the exchange.

Smug Scout cannot even remember what she finally paid. Maybe $6? Yes, after that ridiculous flimflammery, she feels like even more of a mark than before. Still, she is perversely curious to find out if other smoothies could possibly taste as disgusting as “Body Fuel,” so she plans to return to this smoothie bunco parlor.