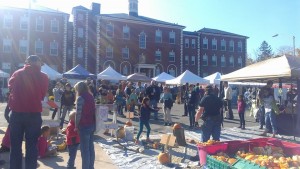 First of all, the title of this post is not a reference to the 90s rock band. Second of all, Smug Scout did not take the photo that accompanies this post because she is not in Portsmouth now (she brazenly lifted it from the Portsmouth FM’s Facebook page). Smug Scout would do anything to be in Portsmouth right now, especially because she hates fall, or more accurately the lack of fall, in L.A. In fact, Smug Scout has minimized and re-named the seasons in L.A. to reflect what happens here in the absence of any actual weather. Thus, L.A. has fire season (September – November), awards season (November – February), and strawberry season (all the other months, plus all year). If there is any difference here between “summer” and “winter,” it is that you are more likely to get sun in January than June, though the temperature in both months averages 60 degrees (well, mainly along the coast, where Smug Scout lives). “January,” in some weird Pavlovian way, triggers the locals to get out their parkas, mittens, mufflers, snow boots and other Arctic camping outdoor gear (aggressively peddled to Angelenos by cynical North Face and REI marketers) that would suffocate Smug Scout in such springlike conditions.

Uh-oh, Smug Scout has really digressed! Her seasonal malaise is surely causing her to focus excessive attention on mocking L.A. and idealizing Portsmouth. So be it. Still, she would not have wanted to be at the Portsmouth FM this weekend to witness an unspeakably un-Smug spectacle: smashing pumpkins. First Smug Scout was puzzled when she looked at the accompanying picture. She could not believe her eyes. Was that a Smug little colorful Portsmouth gargoyle preparing to obliterate a pumpkin on a tree stump with a…croquet mallet? (She also wondered if the burly, belted, and gloved troll in front of the pumpkin dead piles could really be a woman, but that question is hardly germane to her critique.) Why? Would redneck flyover states hold pumpkin shooting contests to promote gun use? Smug Scout finds this kind of “fun” violent and vicious. Smug Scout would never have participated in such a gruesome event in her miniature form because she would have felt too sorry for the murdered pumpkins. (She did win a pumpkin decorating contest at one time, however, by using corn kernels to make a toothy ghoulishly grinning face.) Actually, Smug Scout in her “grown-up” form feels the same way. She vaguely hopes the vindictive Grand Pumpkin (from the Simpsons, not to be mixed up with the harmless Great Pumpkin from Charlie Brown) will come and devour some of these mallet-wielding children. Or she would if that were not a violent thought.

On top of finding this activity violent, Smug Scout finds it incredibly wasteful. Is this the very same FM that gave free food to furloughed federal workers just one week ago? Now they can return for free pumpkin pie “ingredients”? Does no one else object to the metamorphosis of viable local produce into scraps of pulverized pulp, scraps as ill-suited to third world baskets as pre-bagged, dirt-free kale?

Smug Scout found some barely comprehensible edification on the topic of waste when she visited the event website: “Don’t worry, the smashing don’t go to waste, we feed ’em to the pigs.” What kind of interior bumpkin illiterate came up with “smashing don’t”? Did this non-grammarian mean “smashings”? For that matter, did this non-punctuator mean a semicolon? Smug Scout supposes the pigs will find this contest debris tasty enough, though she grimly acknowledges they will come to a violent end as well.

Smug Scout does not believe lessons on violence and waste should come from the Portsmouth Farmers’ Market. These are lessons better taught by horror movies, slaughterhouses, and the lower classes (both poor and moneyed), not a bastion of Smug correctness. Smug downgrade!

If you would like to read more faux folksy, grammatically slapdash, and, let us say, whimsically punctuated text, visit the below site: