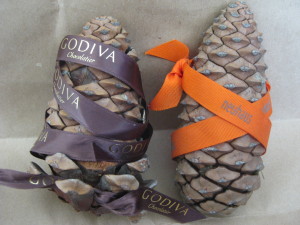 Smug Scout is a big fan of handcrafted items. She seeks them out everywhere from the streets of Paris to New England church fairs and has been known to meander aimlessly for hours on the Etsy web site. She does not, however, use her own hands to craft much of anything, largely due to the damning combination of laziness and ineptitude. Still, once in a while, unexpected forces converge that lead to a frenzy of production. Today those forces led to handmade Upcycled Multi-Region Pine Cone Xmas gifts.

Smug Scout has been thinking about upcycled pine cones for the last few days following a lively exchange with her favorite distant Smug scouts (one in NH, one in flyover territory, one in the squalid snake pit of Key West) on the popular and exciting subject of upcycled objects (so popular and exciting that even one of her favorite distant Smug scouts quickly bowed out of it). Then this morning Smug Scout woke up facing a grim amount of work from the job that has an actual income attached, so not surprisingly she was vigorously motivated to go for a nature walk (she even pretended it was cold enough to wear her North Face fleece pullover) to collect pine cones. She found assorted pine cones and some other curious looking cones to bring home (but not without getting sticky pine cone goo all over her hands, the unnecessary North Face fleece pullover, and even her hair). Then, after a failed attempt to rid herself of the pine cone sap (which Smug Scout discovered you need alcohol to remove, though she doubts red wine will do the trick without creating a new and messier problem), she made six Upcycled Multi-Region Pine Cones using ribbons she had kept from Hermès scarf boxes, Godiva and Neuhaus boxes from Belgium, a Bavarian jam jar, and some unknown domestic packaging. 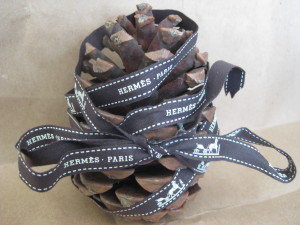 How can you make your own Upcycled Multi-Region Pine Cones? Here is a list of materials for this project:

Smug Scout does not herself have patience for overly complicated crafts projects, so even a clumsy amateur is unlikely to struggle with the instructions. Here they are: 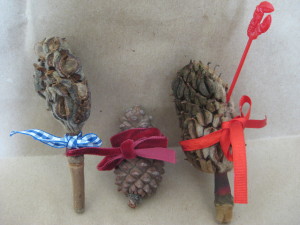 You will see that that Smug Scout also has one cone with a lobster cocktail stick awkwardly emerging from it like a harpoon because she wanted at least one Upcycled Multi-Region Pine Cone to represent New England. Smug Scout is not really sure how many people will covet these Upcycled Multi-Region Pine Cones (or even politely accept one for that matter), but if you are Smug, you will at least appreciate the environmental benefits of upcycling, specifically in this case that the pine cones are happier and more productive wearing pretty ribbons (themselves spared a smelly interment in a landfill) than lying in whatever unceremonious spot they landed after being cast off by their trees. Furthermore, they are unique, handcrafted, and not available for purchase anywhere.

If any readers have other easy ideas for upcycling pine cones, please share them with Smug Scout, especially during this so-called “season of giving.” She “rescues” almost every pine cone she sees on the ground, and there are only so many Smug local object tableaus you can display at home without seeming impossibly précieux (unless of course you are from Portsmouth and your entire house is a Smug local object tableau). Now who wants to “rescue” some extra Smug New England pine cones for her?