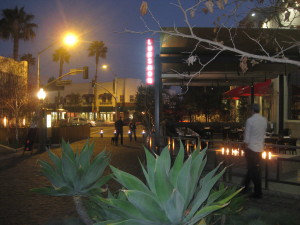 In Los Angeles, January has come to signify something other than hot weather, wildfires, and non-hothouse local tomatoes: “dineLA Restaurant Week.” Smug Scout now puts that entire event in quotation marks for three reasons: a lower case letter should not start a (made-up) name, it does not occur in Louisiana, and it lasts five days longer than a week. Still, since Smug Scout has such a long list of restaurants she wants to try, restaurant “week” is an exciting time for her. She spends hours reading and analyzing menus before narrowing down the final choices. Usually she is happy with the results, but sometimes she makes a big mistake.  It is not always easy to distinguish among “good” Smug, “bad” Smug, and “insufferably and unspeakably awful” Smug. Such was the risk with Lukshon in Culver City. For example, these annoyingly precious excerpts from Lukshon’s web site put a big scowl on her face but do not offer conclusive proof of the Smugness valence:

It is exquisite and modern takes on authentic South-East Asian Cuisine and its wonderfully diverse ingredients.

Lukshon is a drink and a bowl of noodles at the bar, an intimate dinner under the calm of an LA evening on the patio, a celebration in the elegant and comfortable booths, a night shared with friends and strangers at the communal table, the theatre of a completely open kitchen, the rattle and hum of the service, the teak walls with hand-crafted flower inlays; it is the fusion of style and function.

Unfortunately, Lukshon landed squarely in the third category: “insufferably and unspeakably awful” Smug. Why? Well, the problem started because Smug Scout does not eat pigs (which she does not do because they are smarter than most humans she meets). Smug Scout always checks restaurant “week” menus carefully to ensure that there are pig-free options, especially in view of the bacon (and all its domestic, international, and “international” variants) mania still gripping the nation, but Lukshon’s menu caught her off-guard, and she had the below conversation with the server. Now Smug Scout’s readers know that some of the dialogues she reproduces are not verbatim transcriptions but rather embellished or even totally fabricated. This time, however, she is providing you with the exact words.

Smug Scout was uncharacteristically speechless at that point, but then she had a grimly delayed epiphany: Sang Yoon, the chef, had obviously not attached his previous alias to his new restaurant. He used to be known as “Burger Nazi” after he transformed a laid-back beer bar, Father’s Office, into a slick, Smug mob scene with open-mouthed rubes all clamoring for a legendary burger with a straitjacketed preparation. No additions, no subtractions, no substitutions. He scoffed at those who wanted wine (rather than beer) with their burgers but “allowed” it. He served fries in, of all foolish receptacles, a mini shopping cart and with Smug Scout’s tricked-out-mayo nemesis, garlic aioli. No ketchup. Although you would be right to claim that Smug Scout has a high tolerance threshold for such American sins as elitism, snobbery, and pretentiousness, she draws the line at this kind of guns-blazing ego and customer-repellent attitude. In fact, she finds this behavior less befitting to a chef than a communist dictator. 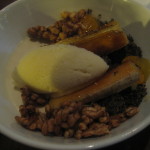 Smug Scout did make it clear, much to the server’s relief, that she would not be returning to Mao Sang Yoon’s empire, but she still wanted to try a dessert. She ordered something totally unappetizing sounding called barley pudding, which came with puffed barley, banana ice cream, and caramelized banana that looked and tasted more like rubbery refrigerated tofu. The server described it as “very unique and different, kind of like having breakfast after dinner.” Even if the idea of “breakfast after dinner” appealed to Smug Scout (unless “breakfast” is code for “Bloody Mary”), she must disrespectfully disagree that it is either “unique” or “different.” Have the dictator and his minions never heard of Rice Krispies Treats?

Oh, how eerie, Smug Scout is now having a “vision” of her own. It seems to be a prophetic one. It shows her dramatically reenacting the above conversation to a vast audience, if one whose interest level covers the vast range between slight and nonexistent. She will relish it nonetheless.