Portland, Maine is one of this country’s most cherished Smug epicenters and as such one of Smug Scout’s favorite places for a vacation.  As you would expect, Portland has plenty of Smug businesses where it is possible to spend large amounts of money on the correct things to eat, drink, wear, and showcase in your house.  The Standard Baking Co. even sets the gold standard, so to speak, for Smug products in Portland.  Let us consider the most obvious Smug factors:

Of course a city like Portland surely has hundreds of businesses with these Smug New England attributes, so you must be wondering what makes Standard Baking Co. so uniquely Smug. In fact, it is because you need to be fluent in multiple European languages to understand the offerings. If you want bread, you do not order a loaf, you order a boule. If you want that small oblong chocolate cake, you call it a bouchon. If you want that pretty nectarine tart, you call it a frangipane. If you do not know ficelle, epi, galette, or financier, just pronounce the name with a native accent and learn what it is by eating it. If Normandy means nothing to you as a type of pain, do not ask and do not be intimidated. Just trust Smug Scout and casually ask if the apples are local. Extra points if you pompously announce you will be serving it with single source artisanal Calvados from a private château distillery. You will silence the Smug Cashier, a rare accomplishment. 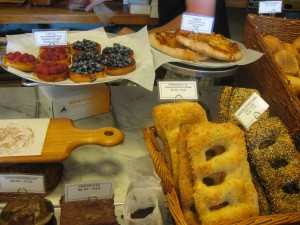 Smug Scout does get chills, though, when she imagines what would happen if she did not know the proper way to order. Picture this nightmarish scenario:

It appears Smug Scout will need to go to Paris to look for les Cupcakes and les Cookies. She can live with that.