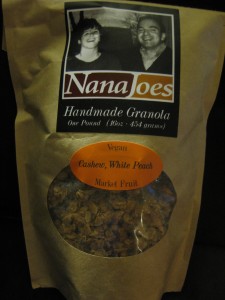 If you must know, Smug Scout loves granola.  She eats it every morning she is forced to go to work.  She likes it because she can put ingredients (granola, yogurt, and of course local, seasonal, organic fruit) in her German reusable plastic container (yes, made in Germany!) and when she arrives at her desk mix it into a Smug L.A. version of Swiss Bircher Müsli. So she is always looking for appropriately artisanal granola, and when she saw Nana Joes Handmade Granola at the legendary Bi-Rite Market in San Francisco, she had to have it, even though she does not understand the absence of an apostrophe in “Joes.” Let us consider why this granola seemed Smug: 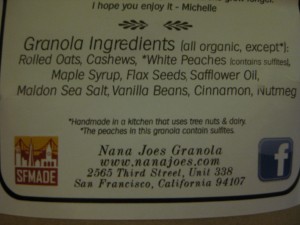 Unfortunately, however, these attributes were not enough to give the product Smug stature, and it is all because of the white peaches, labeled ominously on the back of the package as NOT organic. Now Smug Scout has been known to buy non-organic white peaches if she interrogates the growers and finds out that they use organic methods but are just not certified. Okay, so these peaches are of questionable provenance, but the real problem is that these shady peaches were not baked with the granola but instead come in a separate little plastic bag. What is a plastic bag doing hidden in such outwardly Smug packaging? It is clearly there to trick and torment Smug Scout, who had a terrible time getting this plastic bag open.  She is sure it is a very noxious grade of heavy plastic, like the kind used to transport human corpses, because she could not open it with just her hands, and when she went to maul it open with a sharp knife, chunks of sulfite-dried white peaches went flying around her kitchen.  She became especially irate because it was 6 am and very far from an ideal time to be crawling around the kitchen looking for shockingly uniform clearly machine-diced non-organic white peaches.
On top of that, Smug Scout would like to point out crossly, she does not understand the point of crowing about Maldon Sea Salt.  First of all, there is no exotic faraway Maldon Sea. This is just salt from Essex (England, not New Jersey).  She would be much more impressed if the perky (but plain) pair on the bag would harvest their own salt from the Pacific, which would make this granola an honestly, rather than totally bogus, local product.
Does it even matter at this point that the granola was delicious? 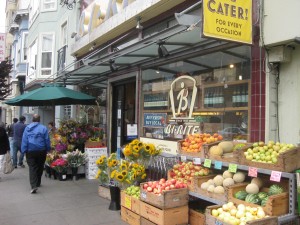 Smug Scout recently visited San Francisco, the Smug Epicenter of the U.S., which presents the problem (not really) of Smugness overload, but a precious little guidebook called Knopf “MapGuide” helped her find the epicenter within the epicenter, a market and “creamery” called Bi-Rite, with these key words:

Smug Scout started at the Creamery,which is just a Smug name for an ice cream shop and has nothing to do with actual cream processing (which always takes place in a lower rent rural location, not in a Smug neighborhood like Mission Dolores).  She was suspicious when she read that many consider the ice cream “the best in the world,” and while she was positive that was a wild exaggeration that had more to do with “creamery,” hip flavors, and high-rent location, she nonetheless wanted to see what the hype was about and especially if it would “taste like the stuff we grew up with” (Bi-Rite’s earnest pledge). Huh?  When Smug Scout thinks back on herself in miniature form, she remembers chocolate ice cream dripping through a cone onto her white t-shirt, not bankrupting her parents to eat double ginger, cardamom, or anything with exotic sea salt.

Anyway, when she and her Smug compatriot, a classic SF resident, arrived, she first wondered if it was also a trendy nightclub because there was a velvet rope that cordoned off a whole section of the sidewalk and even went around the corner.  But no, that was the overflow Creamery line.  Perhaps because the weather was “cold” (low 60s, just freezing), Smug Scout and compatriot could walk right in.  That is good, because Smug Scout does not wait on long lines.  She thinks long lines are for far more egregious suckers than even she is. 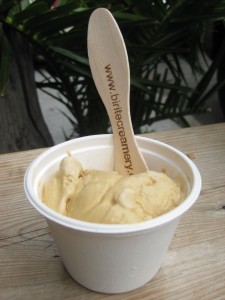 So of course she ordered salted caramel because that is the current ultra-Smug flavor of choice everywhere.  After paying something on the far borderline of reasonable, like $5 for one scoop, she received her ice cream in a biodegradable cardboard bowl with a branded wood chip for a spoon.  Then she sat down to eat it on some petite, narrow reclaimed wood bench outside.  It was good, but she did not like how the sustainable wood chip “spoon” kept sticking to her tongue.  It made the flavor more like salted caramel splinter.

Moving on to the store, Smug Scout was very pleased to see produce and flowers in wood crates right in front of the door just like a roadside farm stand.  Here is how she knew she found the epicenter within the epicenter: 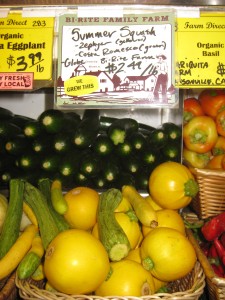 Still, if Smug Scout has one complaint (and let us face it, she always does), it is that the store provides only non-compostable plastic bags, which is very ecologically hostile for a city that does not recycle any plastic bags.  She had to point out this fact at the cash register after she whipped out her own cloth bag.

Oh, yes, Smug Scout will return soon.  If she could marry a supermarket, it would be this one.