For better or worse, Smug Scout is not the only Smug scout. In fact, she is grateful to her Smug compatriots in flyover states and other inhospitable territory for both locating Smug epicenters and photographing local Smug iconography. Smug Scout is starting to think that Minneapolis is a previously unsung Smug epicenter. Please take a look at Clay’s fine work and judge for yourself.

N.B. An undercover Smug scout named Celia decoded the pictograms underneath the Outback logo. Here is her report, apparently from left to right: “1st Subaru, either 100 or 200K miles driven, support for music/arts, environmental awareness, diversity awareness, and bicycling.” Smug Scout finds herself quite bewildered by the cryptic symbols that unlock a Smug world that she never knew a thing about. It may as well be Brigadoon.  Who are all these Smug flyover state residents? How does one sift through all the flat accents, frumpy ice fishing gear, and comatose misogynist Michele Bachmann acolytes to find the Smug underbelly? Smug Scout is on the case!

Though Smug Scout prefers Smug grown-up company, she knows there are many Smug children under five (such as the ones who congregate in boisterous packs at the Portsmouth FM) whom she recognizes as future Smug scouts in miniature form. Smug Scout recognizes that they possess certain abilities and inclinations she happily lacks, such as the operation of felonious babysitting gadgetry like iPads and iPhones.

Smug Scout is grudgingly aware that Apple products, like actual organic, local, heirloom apples, are very Smug, but she would like to dispense with the lot of them, or bushel if you prefer, and advise parents to focus not just on distracting their miniatures with addictive carnival screens that will turn them into anti-social automatons but also on truly Smug old-fashioned children’s playthings: handcrafted stuffed animals. Thus, she dedicates this post to her young readers. 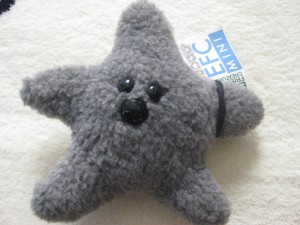 She suggests you bring your Smug parents to Nahcotta, which is a Smug local arts, crafts and sustainable products store in Portsmouth, NH. There is a whole section devoted to shoppers in your demographic, so you will have no trouble spending your Smug parents’ money on superior products. Smug Scout recommends Earth Friendly Creatures, which are small, simple, barely identifiable stuffed animals that cost around $16.  Use the below tips to negotiate with your parents (who may not want to pay so much on something they like to believe they could easily craft themselves–if only they could just finish that nasty organic vegetable canning project).

Warning: if your parents are the type of New Hampshire residents to say “Mass-holes,” please replace “Massachusetts” with “local New England artisans.” Otherwise they could refuse the purchase on nonsensical geographic grounds, no matter how often you point out that Massachusetts is more local than China.

Tip: if you do not live in New England, please tell your parents to schedule a vacation there immediately. Choose Portsmouth, NH, or Portland, ME. Smug parents will just love it!  There is reclaimable wood everywhere, and you’ll notice that some of it is still in an exotic form known as trees.  In fact, tell them that reclaimed wood is so popular that Smug restaurants are even named after prized varieties of it, such as a legendary establishment known as the Black Birch Kitchen & Drinks. Point out there are cocktails made with macerated local black birch tree bark. No one would dream you made that up.

Final note: If your negotiations fail, try telling your parents that if they will not buy you an Earth Friendly Creature, you will embarrass them by lying down and playing dead in front of the next corporate chain you see.  Pick Starbucks, for example. Your parents will be mortified to be stopped and spotted near dangerously multi-source mongrel coffee.